ECUADOR Plans its 1st Edition of the Miss Tourism Ecuador 2020

On the other side of the world in South America, in Ecuador is being planned the National Contest of the first edition of the Miss Tourism Ecuador 2020, whose main objective is to increase tourism in its cities and provinces by the hand of its queen.

The DUKERS business group, our partner in the South American country, is developing and promoting its own website (www.misstourismdukers.com.ec) to start its campaign to motivate the different local authorities, to promote their destinations and the search for candidates, the Final Gala planned by Ecuadorians will be held on Sunday, September 27, 2020 with the objective to celebrate INTERNATIONAL TOURISM DAY.

It is not yet defined in which city the Traditional Costume and Final Gala will be held, proposals are being reviewed in cities and provinces that are interested in hosting the beauty pageant, which every year the International is held in Kuala Lumpur – Malaysia at the end of the year.

The Republic of Ecuador is politically divided into Provinces, which are then divided into Cantons and these into Urban – Rural Parishes.

Currently, ECUADOR is made up of 24 provinces, divided as follows:

Ecuador is a country with a vast and unequaled natural and cultural wealth. The diversity of its four regions has resulted in hundreds of thousands of species of flora and fauna.

ECUADOR’S TOURISM AND ATTRACTIONS TO THE WORLD

Guayaquil, officially Santiago de Guayaquil, is the largest city in Ecuador, in population and economy. It has almost 3 million residents. The metropolitan area of Guayaquil, also known as Gran Guayaquil formed by the city next to the neighboring cities of Samborondón, Daule and Durán; they make up the most populous metropolitan area in the country. It is also the most important center of commerce and finance with influence at national and regional level, as well as the second national center in terms of politics, culture and entertainment, only behind the capital of the country, Quito.

QUITO, Half of the World.

Quito, officially San Francisco de Quito, is the capital of the Republic of Ecuador, capital of the Pichincha Province and the oldest in South America. It is the largest and most populous city in the country, with two million residents in the urban area, and approximately 2.7 million residents throughout the canton. In addition, it is the cantonal head of the Metropolitan District of Quito. It is located on the Guayllabamba pit, on the western slopes of the active Pichincha stratovolcano, in the eastern part of the Andes and its altitude is 2850 meters above sea level.

Cuenca, officially Santa Ana of the four Rivers of Cuenca, is an Ecuadorian city, head of the canton Cuenca and capital of the province of Azuay, as well as its largest and most populous city. It is crossed by the rivers Tomebamba, Tarqui, Yanuncay and Machángara, to the center-south of the inter-Andean region of Ecuador, in the pit of the Paute River, at an altitude of 2,550 meters above sea level and with an Andean climate of 15 Celsius degrees on average. 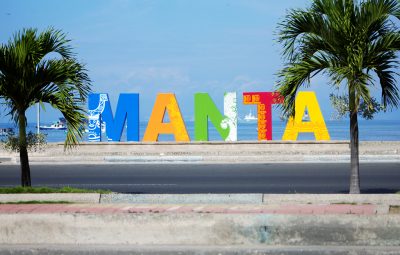 Manta, also known as San Pablo de Manta, is an Ecuadorian city; cantonal head of the Manta Canton, as well as the largest and most populated city in the Province of Manabí. It is located in a bay, which has given it the characteristic of an international port on the coast of the Pacific Ocean, in the center of the coastal region of Ecuador, at an altitude of 6 meters above sea level and with a tropical dry climate of 23 ° C on average.

Machala, also known as San Antonio de Machala, is an Ecuadorian city, cantonal head of the Machala Canton and capital of the Province of El Oro, as well as the largest and most populous city in this region. It is located on the shores of the Pacific Ocean, south of the coastal region of Ecuador.